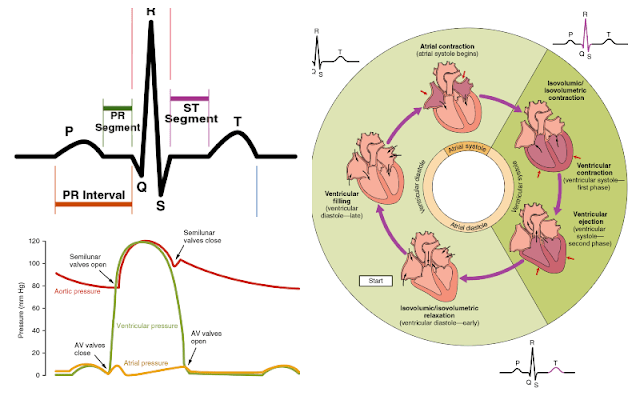 (i) One during which the heart muscle relaxes, called diastole.

(ii) Second during which the heart muscle contracts, called systole.

During ventricular systole, both of the ventricles contract, and two separated blood supplies begin from the heart: one to the lungs and one to all other body organs and organ systems. Atrial diastole is the part of the cardiac cycle during which both of the atria refills with blood.

The successive stages of the cardiac cycle are:

The atria contract due to the wave of contraction, stimulated by the SA node. The blood is forced into the ventricles as the bicuspid and tricuspid valves are open.

The ventricles begin to contract due to a wave of contraction, stimulated by the AV node. The bicuspid and tricuspid valves close immediately producing part of the first heart sound, “lub”. When the ventricles complete their contraction, the blood flows into the pulmonary trunk and aorta as the semilunar valves open.

The ventricles relax and semilunar valves are closed. This causes the second heart sound “dup”. The tricuspid and bicuspid valves open again when the pressure in the ventricles falls and blood flows from the atria into the ventricles.

Electrocardiogram (ECG) is a graphic record of the electric current produced by the excitation of the cardiac muscles over a period of time, using electrodes placed over the skin. The instrument used to record the changes is an electrocardiograph.

A normal electrocardiogram (ECG) is composed of a P wave, a QRS wave (complex), and a T wave.

ECG can also be represented as:

Disorders of the Circulatory System

It is a sudden recurring thoracic pain radiating to arms, especially the left arm when the demand for blood by the heart exceeds the supply of the coronary arteries. It can occur in excessive exercise.

It is the complication due to the reduced blood supply to the heart wall. It results in pain, perspiration, nausea, ECG changes.

It is wall thickening and narrowing of the lumen of medium and large-sized arteries. In atherosclerosis, yellowish plaques (atheromas) of cholesterol and other lipids are deposited within the internal wall and inner media of arteries.

It is sclerosis and the thickening of walls of smaller arteries and arterioles. Arteriosclerosis is common in elderly persons.