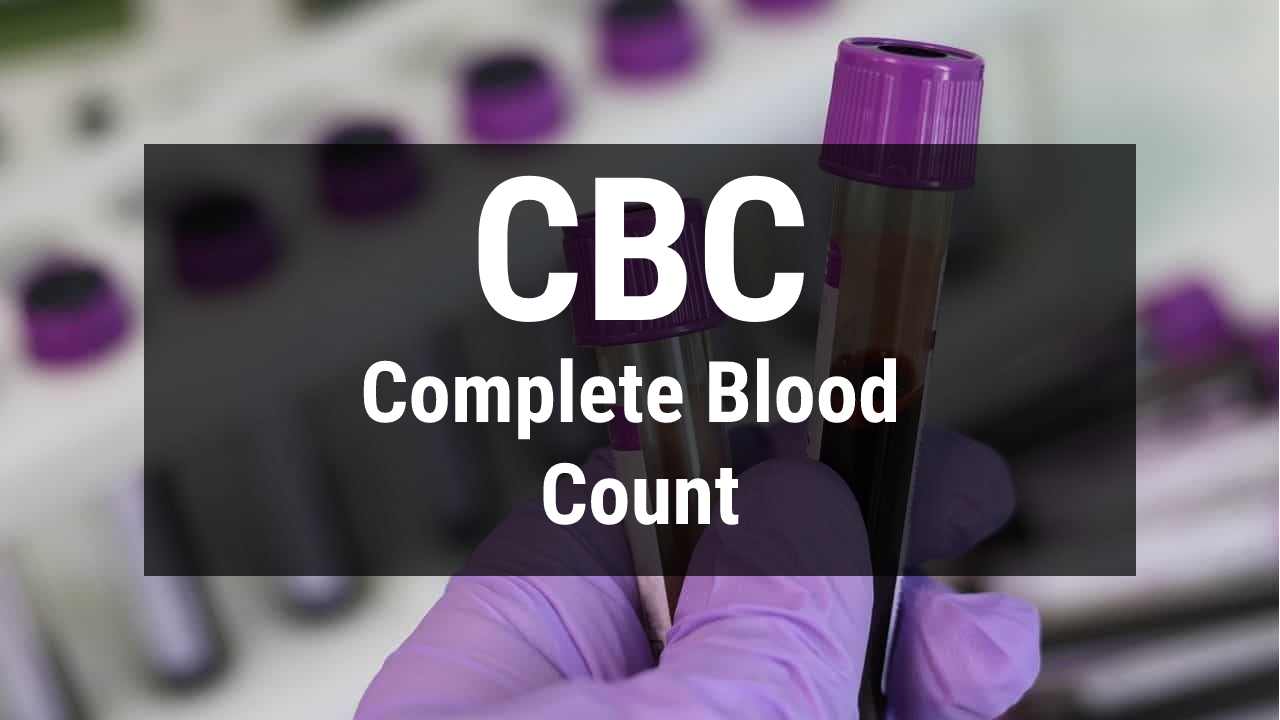 The complete blood count (CBC) test is the counting of the cells that are present in the blood, including red blood cells (RBCs), white blood cells (WBCs), and platelets (PLTs). Also the shape, size, and concentration of these cells in the blood.

So the CBC is a group of tests that can evaluate a patient’s overall health status. The number of blood cells can be lower or higher in a variety of diseases and conditions such as infections, injury, anaemia, or leukaemia.

What are the blood cells:

Composition of the Blood

The average adult has a blood volume of roughly 5 litres, which is composed of plasma (55%) and several kinds of cells (45%).

Red blood cells (RBCs) also called erythrocytes, are produced in the bone marrow and released in the blood. Every RBC contains haemoglobin, an iron-containing complex protein that carries oxygen from the lungs throughout the whole body.

White blood cells also called leukocytes, are colourless, that lack haemoglobin. Every day we encounter millions of microorganisms that may cause infections but these WBCs in our blood are involved in protecting our body against infections and have a role in inflammation and allergic reactions.

There are five different types of WBCs i.e., Neutrophils, Eosinophils, Basophils, Lymphocytes, and Monocytes and each has a different function.

Platelets, also called thrombocytes, are tiny cell fragments that circulate in the bloodstream and are essential for normal blood clotting.

Blood clotting, or coagulation, is an important process that prevents excessive bleeding when a blood vessel is injured. Platelets adhere to the injury site and clump together to form a wall-like structure and prevent blood loss.

The Tests Included in CBC

TLC: The counting of the total number of the white blood cells present per microliter of your whole blood.

DLC: Differential leukocyte count is counting the absolute number and the percentage of five types of WBCs present in the blood i.e., Neutrophils, Eosinophils, Basophils, Lymphocytes, and Monocyte.

The total number of the platelets present per microliter of your blood.

CBC is performed by a qualified Lab technician in the medical lab using an automated Hematology analyzer. The haematology analyzer measures various parameters of blood, including cell counts and the physical features of the cells.

The working principle of early haematology analyzers was based on Coulter’s Principle. However, they have evolved to encompass numerous techniques such as Flow Cytometry, & Spectrophotometry.

The Procedure of CBC Test: